Considering the antiquity of Thirukural, I have always wondered how the original palm leaf manuscript of Tirukural written by Tiruvalluvar was preserved and handed  down to successive generations. It is widely believed Kural was written during the period 500 - 200 BCE .The oldest script used in India at that time was Brahmi. Obviously it would have been in the earliest Tamil Brahmi script.The present day Brahmic or Indic scripts have come from the ancient Brahmi scripts.In that case who transcribed the original Tamil Brahmi script kural to Present day Tamil Indic ?.The regional variations of all Indian language scripts from the Brahmi scripts happened between 3rd century BCE to 14th century AD. But earliest ancient Tamil epigraphic evidences prove Tamil existed even from 5th century BCE. But surprisingly I could not decipher the following Tamil book printed as late as 1781 (Ref wikipedia).

It is very obvious only some experts would have transcribed the original Thirukural manuscripts.Who did it first time ? Why is there no mention about the transcriber's work anywhere ?While I tried to dig out some information on this and other very old palm leaf Tamil manuscripts from the web pages,I stumbled upon some useful informations. In this post I have shared the information I have gathered.

Madras Christian college professors Gift Siromani,S.Govindarajan and M.Chandrasekharan jointly conducted some research on this.Based on the evolution of the Tamil script over the years,they prepared a retroactive script of the Thirvalluvar era and prepared Thirukural manuscripts in Tamil Brahmi .They tried to recreate how Thirukural couplets would have appeared during the various stages of the evolution of the Tamil scripts.Given below are two samples recreated by them.

BC 250 to 250 AD it would have appeared like this .The couplets relate to ஊடல் உவகை 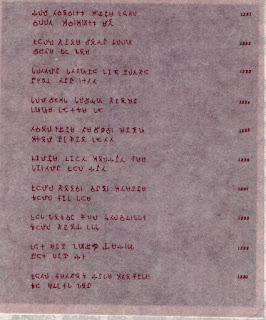 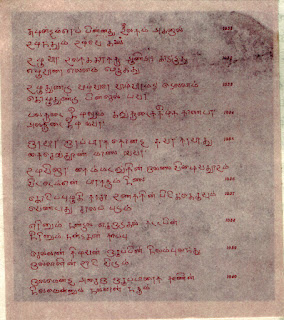 AD 735 to 795 AD it would have appeared like the above image .The couplets relate to உழவு


At the world Classical Tamil conference held at Coimbatore at 2010 a palm leaf manuscript of Thirukural was displayed .


This is a copied palm leaf manuscript, a mere replication .In ancient days when a palm leaf is damaged or likely to be disfigured ,their contents would be copied with a stylus on  new palm leaves.They copied them to be preserved for the posterity .Writing on palm leaves was a skilled job and was done by professionals in olden days.In olden days without  any preserving techniques ,the life of a palm leaf was only aroud 100 to 150 years. Now with the latest techniques their shelf life has improved to 500 years. By stringent measures the life could be extended by another century.If not properly preserved palm leaves could be damaged and decayed by variations in Rh, temperature,light, insects, constant handling and bad storage.Now a days special preservatives are used and palm leaves are stored under air condition at low temperature.

But many scholars took great pains to collect palm leaf manuscripts and preserve them.The Saraswati Mahal Library in Thanjavur, the Oriental Manuscripts Library and the Adyar Library at Chennai, have good collections of manuscripts. Theosophical Society Library, Adyar, has done commendable work in this respect. Sarabhoji and other rulers of Thanjavur took great trouble to collect manuscripts for the Saraswati Mahal library.In 2003 the Government of India started an autonomous body called  National Mission for Manuscripts (NAMAMI) to survey, locate and conserve Indian manuscripts.The idea was  to create a national resource base for manuscripts, for enhancing their access, awareness and use for educational purposes.NAMAMI's main field of work is digitisation of palm leaf manuscripts for the benefit of posterity.The Mission has rare Rigveda manuscripts preserved at the Bhandarkar Oriental Research Institute, Pune.The Orissa state museum is  the largest repository in the world with around 50,000 palm leaf manuscripts.


These palm leaf manuscripts are remnants of history .They contain valuable traditional knowledge in manifold fields,more particularly in the field of medicine.Even today these traditional therapy gives long lasting non surgical relief to many ailments.Early transcription and publication of these rare manuscripts would be a great boon to the world.