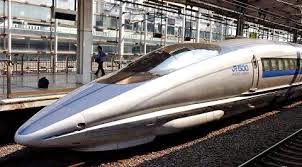 India's first bullet train has been announced between  Mumbai and Ahmadabad in yesterday's railway budget by Railway Minister Sadanada Gowda. But building high speed dedicated rail tracks and other required infrastructure for bullet trains might take minimum of two years . The two years estimate is based on automated track laying machines ,which can lay 1 to 1.5 Km of track per day ,compared to labour intensive manual track lying of 10 days per Km. But Gowda also said in the budget speech that out of 100 projects announced in the last 30 years by Railways only one project has been completed so far. This is the kind of tardy implementation of projects we have in India .Besides the euphoria stops with announcements . There is no  project evaluation thereafter and no accountability to take the project to its logical end . Most of the projects  announced in the past were merely populist to please some sections of the people keeping the vote bank in mind .The cash strapped Railways has to depend on FDI or PPP to fructify their dream projects . The P3 model has been successful in  road projects in India . National highways are far better now and better roads have facilitated to achieve road speeds up to 200 KMs/hr in SUV's and up to 140 Kms/hr in Sedans in Indian highways. For infrastructure building most nations now follow the P3 model .One hopes it would succeed in the Rail sector also. But responses to railway P3 projects were very poor in  the past . It was believed  the return on investments for rail projects were not so encouraging for P3 in rail projects as the cause for poor response . The success of the projects announced by Gowda lies in accelerating P3 projects in railway .This requires uncompromising commitments from the railways department .

Gowda's emphasis was more on increasing the passenger train speeds . Increasing Passenger train speeds with existing infrastructure to 160 KMs wherever possible can also be considered . There is also a strong case for increasing the goods train speeds. Perhaps Indian freight trains are the most sluggish . Gowda said he would make Indian Railways the largest freight carrier of the world . But this can never be achieved with the kind of speed at which our goods train moves now. Railways minister talked about massive integration in computerisation of railway functions .This is a welcome move . But technology up gradation in operations is required to scale up efficiency . But there was no mention about operational technology up gradation .

Initiatives like online booking for retiring rooms , online purchase of  unreserved tickets and platform tickets ,wake up calls, RO water ,on board cleaning etc are welcome moves .On the safety front introduction of  ultra sonic devices to detect rail fractures and automatic closing of doors both in mainline and suburban coaches , though belated is another welcome move .

One hopes FDI and PPP will change the face of Indian Railways in the years to come . Land acquisition ,finalising P3 agreements or getting sufficient FDI ,building infrastructure and laying tracks for high speed bullet trains would  all take considerable time .With a determined PM like Modi who reviews at regular intervals all projects,the bullet train dream could get fructified at least by 2017 .
Posted by outshine at 9:56 AM